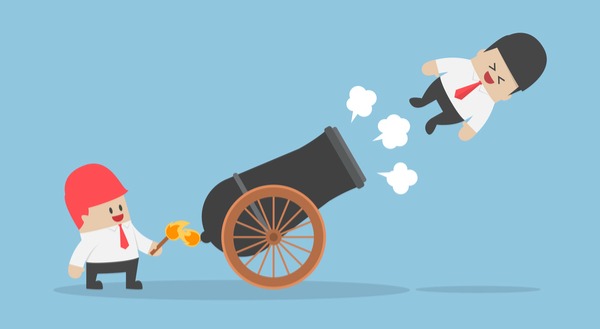 Instead, the writers who persevere have committed to deadlines, feedback and accountability – you know, the painful stuff – as the bedrock of their routines.

That’s why I model my own web-based boot camp on a TV staff’s writers’ room – because – ultimately – success can only be counted in pages.

So, if you find yourself stuck at the starting line, if your inexperience or insecurity is holding back that first, inertia-ridden step, here’s good news: your real education awaits in that morass of uncertainty. 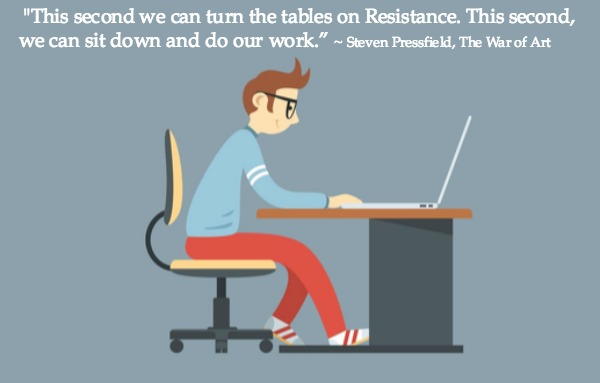 2. Don’t Be Your Own Worst Critic

Would you go to a job interview and talk about what a lousy employee you are? Would you pitch yourself as a failure – unreliable – a fraud?

Insane, right? Yet that’s how many, many writers present themselves when they talk about their work.

I am always astounded – but no longer surprised – to witness the self-inflicted scorn that they would never, ever dump on another person (even if they considered it justified).

The reason for this self- flagellation is no mystery. Writing is hard. It devours your time, your energy, your ego and your pride.

At the end of every writing day, we are too commonly disappointed by the quality and/or quantity of our output.

Since we were (mostly) raised to be sensible, result-minded high-achievers, we find this frustration intolerable.

Many writers convince themselves that they are doing something wrong, and blame themselves for not being able to master it.

Be assured: you are doing it right.

Frustration and rejection are all part of the package – not just for beginners but for the most accomplished talents in town.

But don’t take my word for it – just tune in to the Oscars for Hollywood’s annual parade of thwarted dreams.

So: you might think you’re demonstrating your modesty, or your meticulous standards, or your lack of self-delusion – but when you tell people that your work sucks, they are apt to believe you.

Fortunately this is all avoidable, but it requires a little practice.

First, get on your own team.

If you don’t advocate for yourself, nobody else will either. Nobody expects your work to be perfect – but everybody expects you to work hard, fight for what you believe, and collaborate in good faith.

Second, be conscious of the way you talk about your work.

Get out of the habit of using terms like “good” and “bad” and every other qualifier. Better to think of it as in progress. Therefore it doesn’t suck – it just isn’t finished. 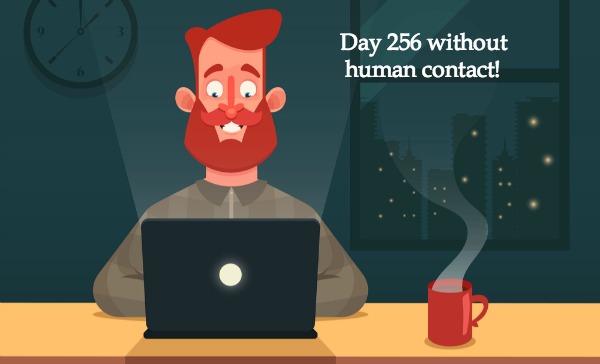 Everybody is familiar with the notion that being a hermit, a shut-in, a loner is part of being a writer. The stereotype of the socially-stunted screenwriter is by now its own kind of cliché.

But, like most clichés, there’s some truth to it. The work itself requires intense concentration and laser-like focus bordering on self-hypnosis.

But while isolation might be good for your work in the short-term, long-term it tends to be terrible for your mental health.

Isolation can produce depression and all its attendant ailments: anxiety, insomnia, bad diet and collapsed self-esteem (See #2 above).

It’s also bad for your career.

Your written work is only one aspect of any success you might achieve. Whether you enjoy networking or not, you will absolutely need to cultivate and nurture relationships with your fellow Industry travelers.

Once again, there’s good news. The advent of social media makes staying in touch a breeze – but make time to meet face-to-face too.

Grab coffee, or maybe invite an exec to go on a lunchtime power-walk instead of the typical meet-and-greet.

The vast majority of execs are stuck behind a desk all day and night too, and everybody is looking to wedge a little exercise into their busy days.

Which brings me to …

Isolation is only one entry in the catalogue of hardships we inflict on ourselves in the name of screenwriting.

Here’s why: the work never ends. As the legendary Lawrence Kasdan noted, “being a writer is like having homework every night for the rest of your life.”

Because the work is so time-consuming, and the competition so fierce, it’s easy for writers – particularly new writers – to pour all their time and energy into the effort at the expense of all else.

Pretty soon they’re living on caffeine-induced adrenalin, which destroys healthy sleep, which results in the craving for more caffeine.

Once again, it’s easy for writers to confuse this herculean effort with actual work. This mistaken impression is sometimes reinforced by euphoria induced by sleep deprivation.

If that’s not damaging enough, lousy sleep also affects what you eat.

Your reeling body will demand (besides more caffeine) anything that produces the glucose your brain desperately needs to focus.

Glucose is, of course, a fancy work for sugar – the sacred icon of our fast-food culture – so finding more of it is no problem. 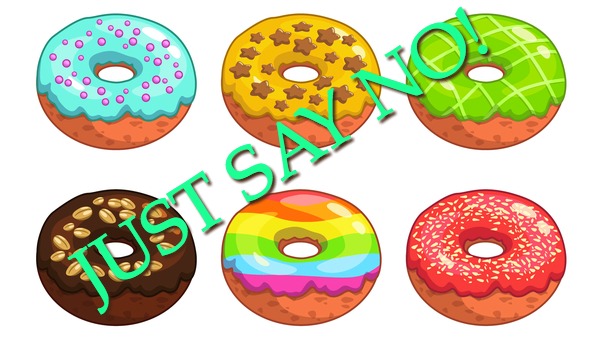 All the cheap, tasty calories are also an easy – that is, short-term – fix for the wall-to-wall stress evoked by any career of deadline-driven creativity.

The way through this requires a bit of a paradigm shift.

It starts by considering that writers have more in common with elite athletes than that stereotype of the desk-bound schlub.

Great as he is, Tom Brady doesn’t play football 24/7. Venus and Serena Williams, Steph Curry, Michael Phelps – their brilliance is built upon a bedrock of self-care.

Like a professional athlete, your career depends on your ability to perform – regularly and reliably – at the peak of your ability.

Sure, there will be times when you have to push your physical limits to make a deadline or break through an obstacle.

But, if lashing yourself (see #2 above) is your default way of working, well, it’s likely your career (and maybe you) will not enjoy longevity.

So one of the smartest investments you can make for your career is a commitment to your health.

Start with your sleep.

According to the CIA, sleep deprivation is – literally – considered torture. Generals in war zones routinely forbid being awakened no matter how severe a military crisis.

And if astronauts on the International Space Station can take power naps every day, I think it’s cool for you too.

Writers are notorious for their terrible diets, but it’s not (always) due to gluttony and sloth.

For writers trying to be productive (and that’s all of us), food represents one gigantic time-suck. It’s a hassle to buy, to prepare and to cook. So when it comes to seeking shortcuts, grown-up food is often the first thing to go

The good news is that this is fixable without too much trouble.

You are already well acquainted with the solution: the internet. The web is bursting with smart food information and time-saving options – whether it’s grocery delivery, meal-prep services, cheap crock-pots and/or a universe of solid-if-annoying advice.

But first – it requires is that you make a truly militant commitment to your self-care.

As my dear friend & cherished mentor Lew Hunter likes to say, “Write on!”

Be sure to opt-in to Michael’s free updates here!